Yesterday, the Linux Foundation (LF) launched a new service, called “Community Bridge” — an ambitious platform that promises a self-service system to handle finances, address security issues, manage CLAs and license compliance, and also bring mentorship to projects. These tasks are difficult work that typically require human intervention, so we understand the allure of automating them; we and our peer organizations have long welcomed newcomers to this field and have together sought collaborative assistance for these issues. Indeed, Community Bridge's offerings bear some similarity to the work of organizations like Apache Software Foundation, the Free Software Foundation (FSF), the GNOME Foundation (GF), Open Source Initiative (OSI), Software in the Public Interest (SPI) and Conservancy. People have already begun to ask us to compare this initiative to our work and the work of our peer organizations. This blog post hopefully answers those questions and anticipated similar questions.

The first huge difference (and the biggest disappointment for the entire FOSS community) is that LF's Community Bridge is a proprietary software system. §4.2 of their Platform Use Agreement requires those who sign up for this platform to agree to a proprietary software license, and LF has remained silent about the proprietary nature of the platform in its explanatory materials. The LF, as an organization dedicated to Open Source, should release the source for Community Bridge. At Conservancy, we've worked since 2012 on a Non-Profit Accounting Software system, including creating a tagging system for transparently documenting ledger transactions, and various support software around that. We and SPI both now use these methods daily. We also funded the creation of a system to manage mentorship programs, which now runs the Outreachy mentorship program. We believe fundamentally that the infrastructure we provide for FOSS fiscal sponsorship (including accounting, mentorship and license compliance) must itself be FOSS, and developed in public as a FOSS project. LF's own research already shows that transparency is impossible for systems that are not FOSS. More importantly, LF's new software could directly benefit so many organizations in our community, including not only Conservancy but also the many others (listed above) who do some form of fiscal sponsorship. LF shouldn't behave like a proprietary software company like Patreon or Kickstarter, but instead support FOSS development. Generally speaking, all Conservancy's peer organizations (listed above) have been fully dedicated to the idea that any infrastructure developed for fiscal sponsorship should itself be FOSS. LF has deviated here from this community norm by unnecessarily requiring FOSS developers to use proprietary software to receive these services, and also failing to collaborate over a FOSS codebase with the existing community of organizations. LF Executive Director Jim Zemlin has said that he “wants more participation in open source … to advance its sustainability and … wants organizations to share their code for the benefit of their fellow [hu]mankind”; we ask him to apply these principles to his own organization now.

The second difference is that LF is not a charity, but a trade association — designed to serve the common business interest of its paid members, who control its Board of Directors. This means that donations made to projects through their system will not be tax-deductible in the USA, and that the money can be used in ways that do not necessarily benefit the public good. For some projects, this may well be an advantage: not all FOSS projects operate in the public good. We believe charitable commitment remains a huge benefit of joining a fiscal sponsor like Conservancy, FSF, GF, or SPI. While charitable affiliation means there are more constraints on how projects can spend their funds, as the projects must show that their spending serves the public benefit, we believe that such constraints are most valuable. Legal requirements that assure behavior of the organization always benefits the general public are a good thing. However, some projects may indeed prefer to serve the common business interest of LF's member companies rather than the public good, but projects should note such benefit to the common business interest is mandatory on this platform — it's explicitly unauthorized to use LF's platform to engage in activities in conflict with LF’s trade association status). Furthermore, (per the FAQ) only one maintainer can administer a project's account, so the platform currently only supports the “BDFL” FOSS governance model, which has already been widely discredited. No governance check exists to ensure that the project's interests align with spending, or to verify that the maintainer acts with consent of a larger group to implement group decisions. Even worse, (per §2.3 of the Usage Agreement) terminating the relationship means ceasing use of the account; no provision allows transfer of the money somewhere else when projects' needs change.

Finally, the LF offers services that are mainly orthogonal and/or a subset of the services provided by a typical fiscal sponsor. Conservancy, for example, does work to negotiate contracts, assist in active fundraising, deal with legal and licensing issues, and various other hands-on work. LF's system is similar to Patreon and other platforms in that it is a hands-off system that takes a cut of the money and provides minimal financial services. Participants will still need to worry about forming their own organization if they want to sign contracts, have an entity that can engage with lawyers and receive legal advice for the project, work through governance issues, or the many other things that projects often want from a fiscal sponsor.

Historically, fiscal sponsors in FOSS have not treated each other as competitors. Conservancy collaborates often with SPI, FSF, and GF in particular. We refer applicant projects to other entities, including explaining to applicants that a trade association may be a better fit for their project. In some cases, we have even referred such trade-association-appropriate applicants to the LF itself, and the LF then helped them form their own sub-organizations and/or became LF Collaborative Projects. The launch of this platform, as proprietary software, without coordination with the rest of the FOSS organization community, is unnecessarily uncollaborative with our community and we therefore encourage some skepticism here. That said, this new LF system is probably just right for FOSS projects that (a) prefer to use single-point-of-failure, proprietary software rather than FOSS for their infrastructure, (b) do not want to operate in a way that is dedicated to the public good, and (c) have very minimal fiscal sponsorship needs, such as occasional reimbursements of project expenses.

Update on 2019-04-01: Community Bridge was also discussed on episode 0x65 of Free as in Freedom, which is available in mp3 format and ogg format.

Next weekend, our President and Distinguished Technologist, Bradley Kuhn, will be in Pasadena for the seventeenth annual edition of the Southern California Linux Expo aka SCALE. SCALE is a community-run conference that starts on Thursday. March 7th and concludes on Sunday, March 10th.

On Sunday afternoon, Bradley will give a talk titled, "If Open Source Isn't Sustainable, Maybe Software Freedom Is?" a forward-looking talk on the future of free software.

Bradley will also run a workshop as part of the Embedded Apprentice Linux Engineer program, aka E-ALE series. "We cover introductory material for people new to the problem space. We're concentrating on userspace drivers this year in order to show people how you can, in fact, drive hardware without having to write kernel code." says Behan Webster, who co-founded aka E-ALE, with Tom King and John Hawley. The workshop is titled, "Navigate Licensing to Build Embedded Linux Apps" and will provide a good foundation for developers who are interested in learnng more about licensing their embedded apps.

Conservancy will also have booth #731 at SCALE during the following times -- swing by and say hello!

We could really use some volunteers to help us to greet folks, talk about our work and catch up with our supporters. If you can help with the booth please email us -- we'd really appreciate it!

Last year, in FOSDEM's Legal & Policy Devroom , we promised to hold an event co-located with the 2019 FOSDEM to have more in depth discussion around the legal issues that we care about as a community and in particular, copyleft. We made good on that promise and this year the first annual Copyleft Conf took place on February 4th. About 150 people came to the event from copyleft enthusiasts to the "copyleft curious." The venue, DigitYser was funky and accessible and walking distance from many downtown Brussels hotels. 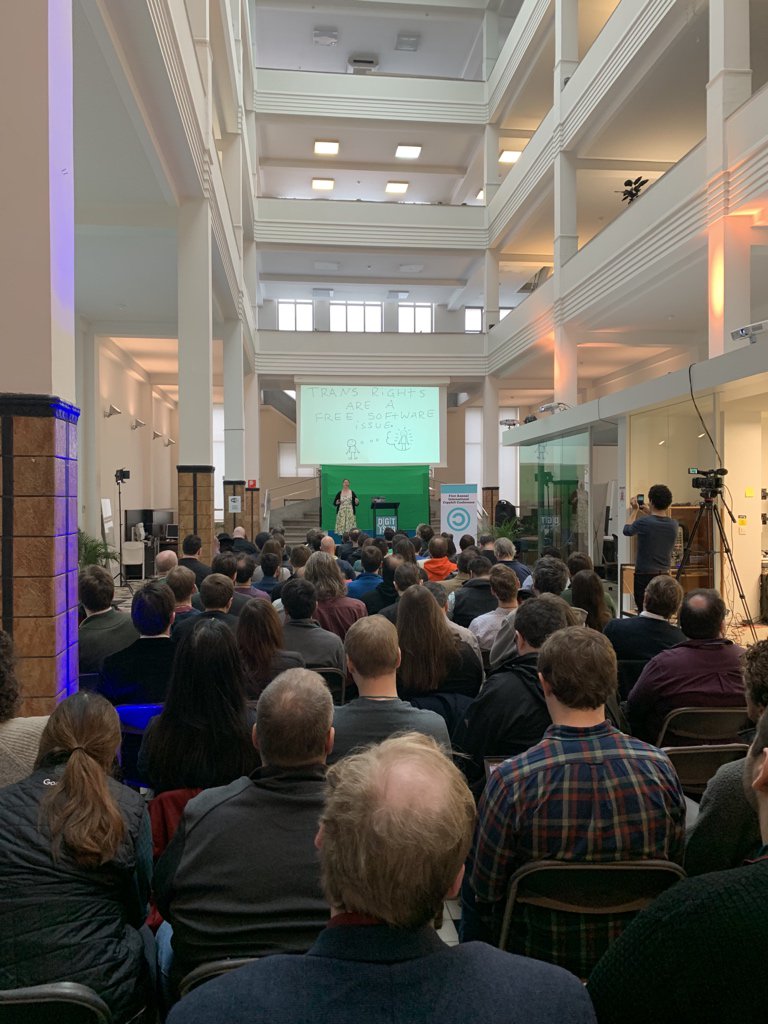 By all accounts, it was a very successful first event. We had 25 speakers, panelists and discussion leaders -- including lawyers, coders, academics, non-profit employees and industry folks. The audience was extremely engaged, participating in discussions and asking great questions.

Here at Conservancy, we've wanted GPL compliance and copyleft licensing to be de-mystified and approachable for a long time. We also wanted to provide a place to talk about the future of copyleft; where else it might impactfully be applied, how it might evolve as technology changes and how it could best serve the next generation of users and developers. Additionally, we needed it to be a friendly, welcoming space where new folks and more experienced folks could begin to bridge some gaps.

Our Most Sincere Thanks

Thanks so much to our program committee, our onsite volunteers and everyone who helped us spread the word about the event. We want to especially thank our friends from the FOSDEM video team, who joined us the day after FOSDEM (which is already a massive gift to the free software community!) and spent the day live-streaming and recording all our sessions. Thank you as well to the lovely folks at DigitYser who went above and beyond to assist the video team and promote our event to the local Belgian community. 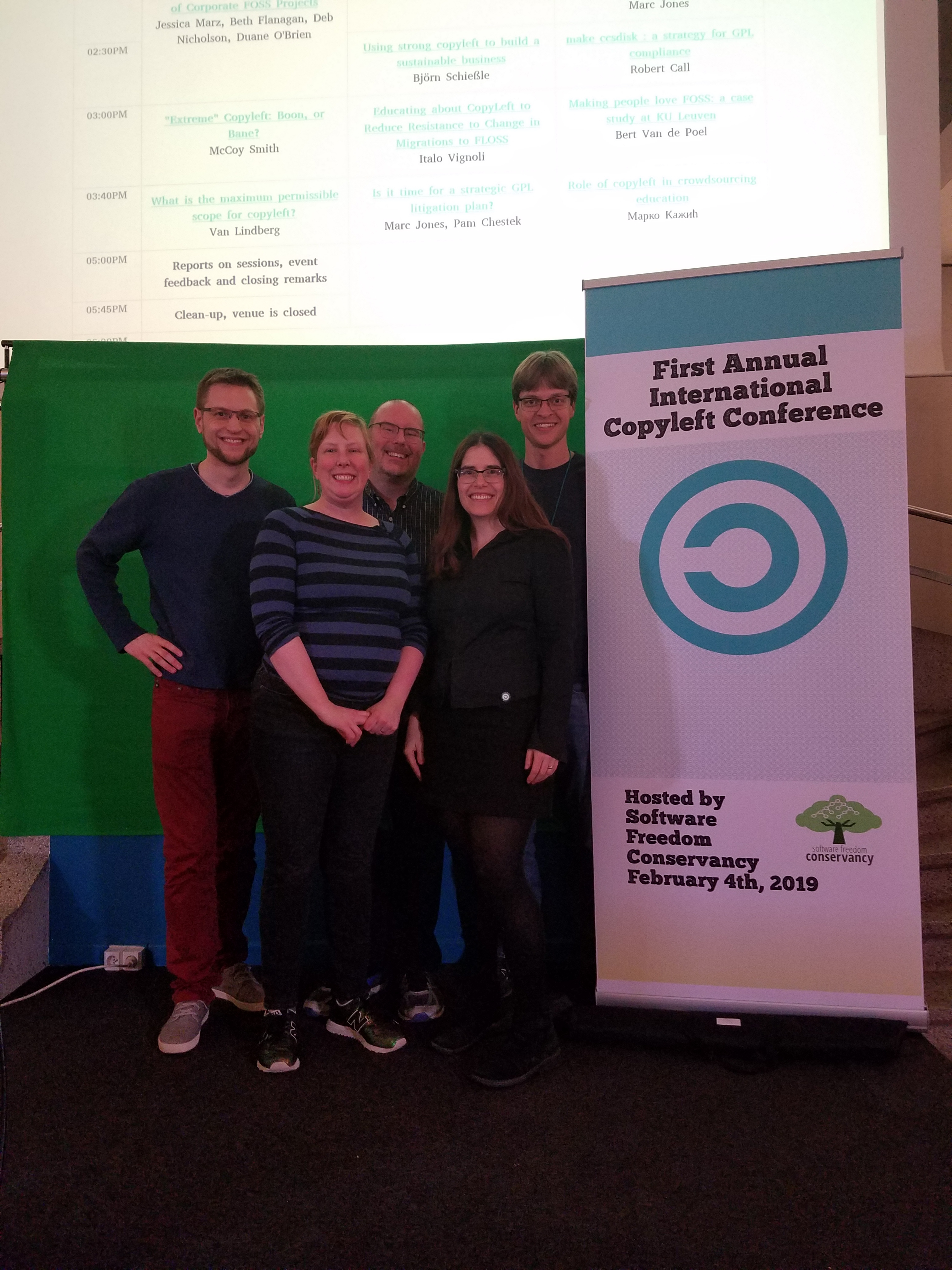 Copyleft Conf would've been nothing without our speakers and discussion leaders, or our inspiring keynote Molly deBlanc, who set a high-minded and altruistic goal for the day's discussions. We are also very grateful to our sponsors and of course, all our lovely attendees who took a chance and came out for an inaugural event.

We're so glad you asked! First of all, make sure you stay in touch by joining our low-traffic mailing list. Also, stay tuned, because video is coming. We will let you know when it's all up and we hope you'll share the sessions you liked with friends and colleagues. And finally, please let us know if you have thoughts for making Copyleft Conf better next time, via email. We'd love to hear from you.

Both images are licensed CC.BY.SA, the picture of Molly deBlanc was taken by Leslie Hawthorn and the staff picture by Deb Nicholson (with help.)

Hello again, friends! January at Conservancy is a very busy month -- we launch an Outreachy round, close our financial year, finish up our year-end fundraising and then? Well, then we get ready to go out and talk to folks about software freedom and events like linux.conf.au and FOSDEM. In fact our Executive Director, Karen Sandler's talk on "Right Not to Broadcast" and our Distinguished Technologist, Bradley Kuhn's talk on "Preventing the IOT Dystopia with Copyleft" are both already up.

And, oh boy, are we at FOSDEM this year.

We could really use your help in several key areas:

If you are able to help out with any of these tasks, please drop us a note so we can schedule you. We will be eternally grateful for any slice of time you can offer. Small orgs like Conservancy depend on our supporters to pitch in -- thank you so much!