I’ve been traveling quite a lot recently and have had the good fortune of participating in some dynamite conferences. Often we’re so busy with our work and travel that we aren’t able to make the time to report on it properly, which results in a lot of our acomplishments and activities happening silently1. August’s travel was intense, and while my inbox backlog continues to be a bit unnerving, I’ve got to tell you about where I’ve been before September is completely over too!

As many readers probably know, I’m an enthusiastic user and fan of GNOME. And, as the former Executive Director of the GNOME Foundation, I was so thrilled when I was invited to give a keynote speech at the annual main GNOME conference, GUADEC. Given that this year is GNOME’s 20th birthday, it was a special year to be able to participate in the conference.

GUADEC was invigorating. With Ubuntu returning to GNOME and the success of Endless and other commercial initiatives around GNOME, the GNOME community is optimistic and focused on the future. There were many new contributors but also a great showing amongst folks who have been around the community for a long time. 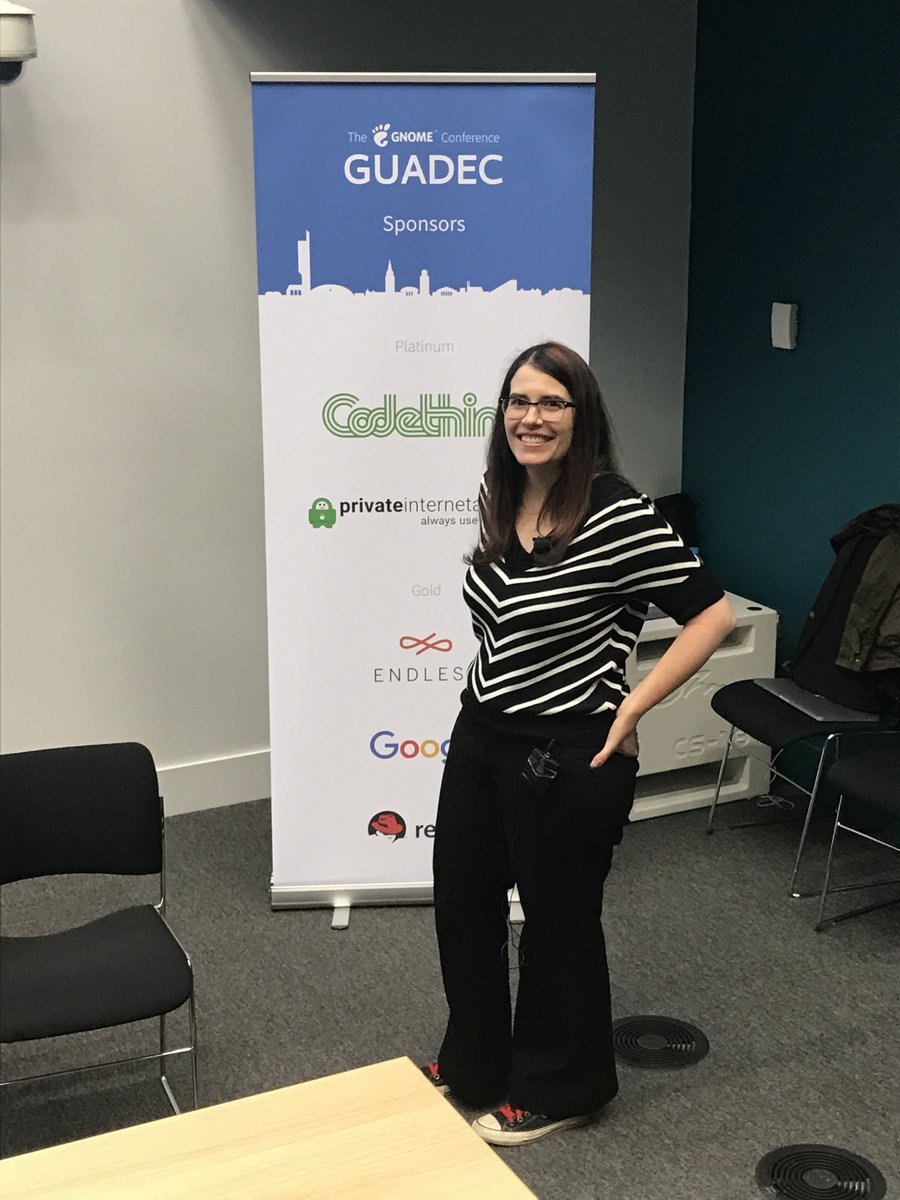 My talk focused on the personal ethical responsibilities of free software contributors and how GNOME contributors can engage in the process of steering our technology in the direction of transparency and security. While I wasn’t intending to talk about medical devices very much in my talk, for a majority of the audience this was their first GUADEC or free software conference and the topic came up to illustrate some of my main points. As a society we’re building our critical infrastructure on proprietary software, entrusting single companies with some of our most important information and interactions. I strongly believe that we need technologists to stand up for ethical technology now, especially within the companies that are producing it. I recommended that contributors engage with management to discuss the long term business advantages of doing the right thing. As it turned out, there were also several young attendees in the audience who have implanted medical devices so it was a great opportunity to connect. Over time, these issues will impact more and more people.

I was excited to see Neil McGovern, the GNOME Foundation’s new Executive Director, in action. After I moved to Conservancy, I served on a Hiring Committee to help the Foundation find the right person for this role. There were many very impressive candidates, but Neil was the stand out. Neil gave an inspiring freedom-focused talk, revealing the great job he’s already doing.

There was also a big party for GNOME’s 20th birthday which was a lot of fun. I moderated a panel on the history of GNOME, and learned a lot of fun tidbits about GNOME’s past! I was also excited to see the “Pants Award” go to Bastian Ilso, who puts together awesome videos for GNOME releases (and ropes me into doing the voiceovers too).

Soon after I got back from GUADEC it was time to head to DebConf. I could only make it for part of DebConf, which definitely left me wishing I could have been there for the whole time. 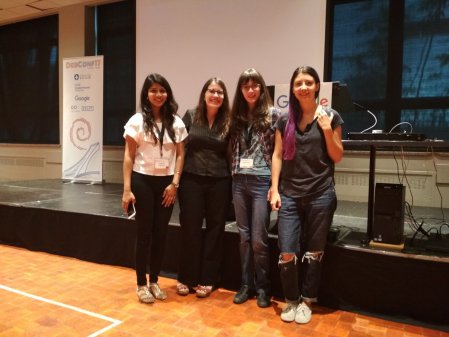 This time the conference was in Montreal, and I had the privilege of giving a presentation about Outreachy. The talk was very well attended and I left plenty of time for questions. The best part was getting to meet a number of Outreachy alums, mentors and coordinators.

I also had the opportunity to talk to Debian folks about the copyright aggregation project and to participate as a Debian Developer. This was my first Debian event since I became an official non-uploading Debian Developer. While I felt more of a responsibility to work proactively on things that Debian needed to have done, I also felt a strong sense of belonging in the community. When DebConf was held in New York seven years ago, I went briefly for a screening of Patent Absurdity, which I was interviewed in, but was so intimidated by the conference that I basically ran away immediately after! (Somewhat relatedly, I recently recorded a brief video about Imposter Syndrome.) Being recognized as an official contributor to the project helps not only to feel like your contributions are appreciated (even if they aren’t code) but also that you are more than welcome in a community - that you are a part of it.

The last conference I got to this summer was FrOSCon. I hadn’t heard of this conference until recently and was surprised to learn how big it is. Primarily a local German conference, FrOSCon attracts almost 2000 people. Like FOSDEM, the event runs only over the weekend. Also like FOSDEM, the conference organization is extremely impressive. When I arrived the night before the conference, I went over to see if I could help get things set up but there were so many people there to help they actually had nothing for another person to do!

I was asked to do my standard medical devices talk as the first keynote of the conference, and I was glad I gave that particular talk - the room was full of people who hadn’t heard it. The questions I got were insightful and the enthusiasm in the discussions after I spoke was exciting. I also did a couple of interviews with local tech press reporters and met some fabulous people which led to great discussions. A few of us spontaneously gathered a working group on ethics for IoT and informed consent. Since then Emma Lilliestam, who also spoke at FrOSCon about issues related to software and cyborgs, has been writing up these issues and further developing thought on the topic. 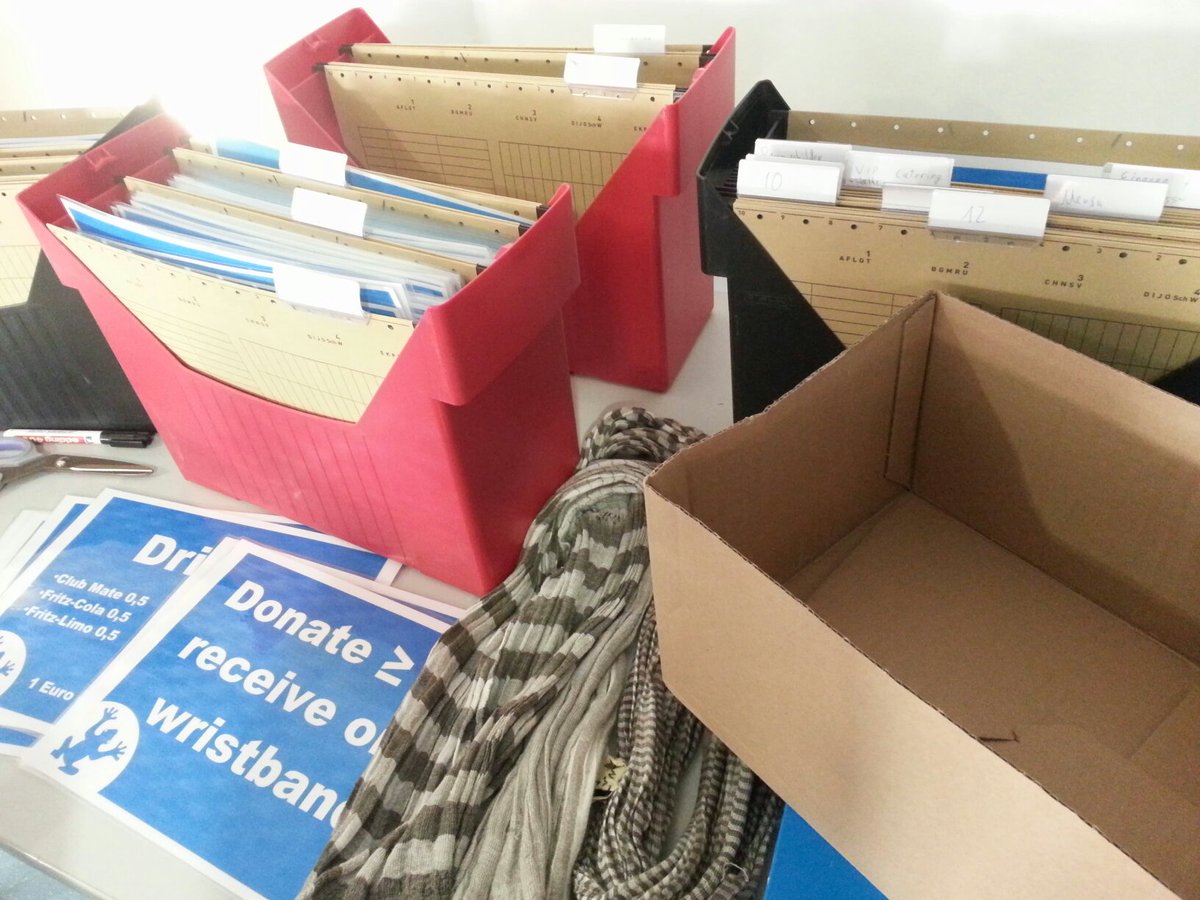 I fully appreciated the organization of the event when I stuck around to help with takedown.

It was amazing to see everything get taken down, cataloged and organized for next year. FrOSCon is definitely a conference I would recommend to others in the future.

While the summer is over, it seems like it’s always conference season. This evening I’m delivering a keynote presentation at Ohio Linux Fest, a conference I’ve always wanted to attend. While it’s a lot of travel, I’m grateful to get the opportunity to meet with so many people interested in free an open source software and to have the chance to encourage folks to think about the important issues of our day. If you attend any conference that I’m at, please be sure to say hello!

1 Conservancy has a staff of four full time people, which includes no marketers, campaigns people or anyone focused on PR.