I’m writing this on my way to Campus Party Brasil, and I’m finally able to report about and reflect on linux.conf.au. I’m still buoyed by the enthusiasm and passion exhibited by the Linux Australia community.

I hit the ground running in Hobart. The organizers invited me to give a presentation in the opening plenary to introduce Outreachy. I explained why we need the program, how it works on a basic level and shared the metrics that show that the program is succeeding in its goals. Chris Neugebauer, lead organizer and emcee for the week, then surprised the crowd by announcing that Outreachy would be the designated charity for the conference. Every year, LCA picks a charity and sells raffle tickets to raise money for the selected charity. Usually this is a local charity, so this year LCA focused on raising money to support interns in Australia and New Zealand.

The first two days of the conference were mini-conference days, each organized by a volunteer to have a day-long track on a particular topic. I proposed a GPL enforcement feedback session for the Linux kernel miniconf—the third in our series. So far each session has been on a different continent to make sure that people have a chance to weigh in all over the world. The session wasn’t recorded, as we wanted to make sure that attendees felt comfortable speaking candidly. James Scheibner of the University of Tasmania volunteered to take notes to make sure we kept track of what was said. The session was well attended. I didn’t count how many people were there, but others told me that it was somewhere between 80 and 100 people. I expected the session to be like the one at Linux Plumbers, with an immediate flood of thoughts about enforcement and Conservancy’s activities in particular, but instead this session started out as a Q&A. About half way into the designated time, I stopped the Q&A and specifically asked for feedback. When no one volunteered to speak, I goaded the audience a bit, eventually saying that if no one had any feedback I was going to take it that they were happy with Conservancy’s work. The audience burst into applause, and there were shouts of “thank you!” The positive response was just fantastic. We continued with Q&A and also brainstorming about things that can be done in the future. I also facilitated a discussion in the Legal & Policy miniconf on Tuesday, which included a lot of interesting discussion too.

The keynotes were all really good, and I would be remiss if I didn’t point to r0ml’s talk “Keeping Linux Great”. There’s a full write-up of it on Rodger Donaldson’s blog. As always, r0ml’s talk was a roller coaster ride, densely packed with thoughts and observations. I was especially surprised to see he included a slide with Conservancy’s logo between pictures of me and Bradley! He said (thanks to Rodger for transcribing this):

If you think I’m a bozo, you need to join Software Freedom Conservancy, because they’re the vanguard of trying to push free and open software into the future and preventing people like me from ruining it. And if you think that I have an excellent point and that this might be the future, we still need free software to build it. We still need somebody to be the rearguard to prevent the barbarians from overrunning us while we build this future. So if you agree with me you should join Software Freedom Conservancy.

The pictures of us were huge on the giant screen in Plenary Hall—Bradley turned bright red, much to my amusement!

I also gave a talk in the same room, called “Surviving the Next 30 Years of Free Software”. I plan to write a separate post about it, but the video is already up. This deals with a lot of issues I’ve been wrestling with about how our community transitions when more of us become incapacitated and pass away. It’s heavy stuff, and a hard topic to talk and think about, but it’s important. I appreciate the fact that this topic was chosen by the conference and that many in the Linux Australia community are receptive to the ideas I proposed.

There were so many great talks and an engaging hallway track. I recommend reading Kathy Reid’s write-up of her highlights. (Also at the conference Kathy was elected to the post of president for Linux Australia.) 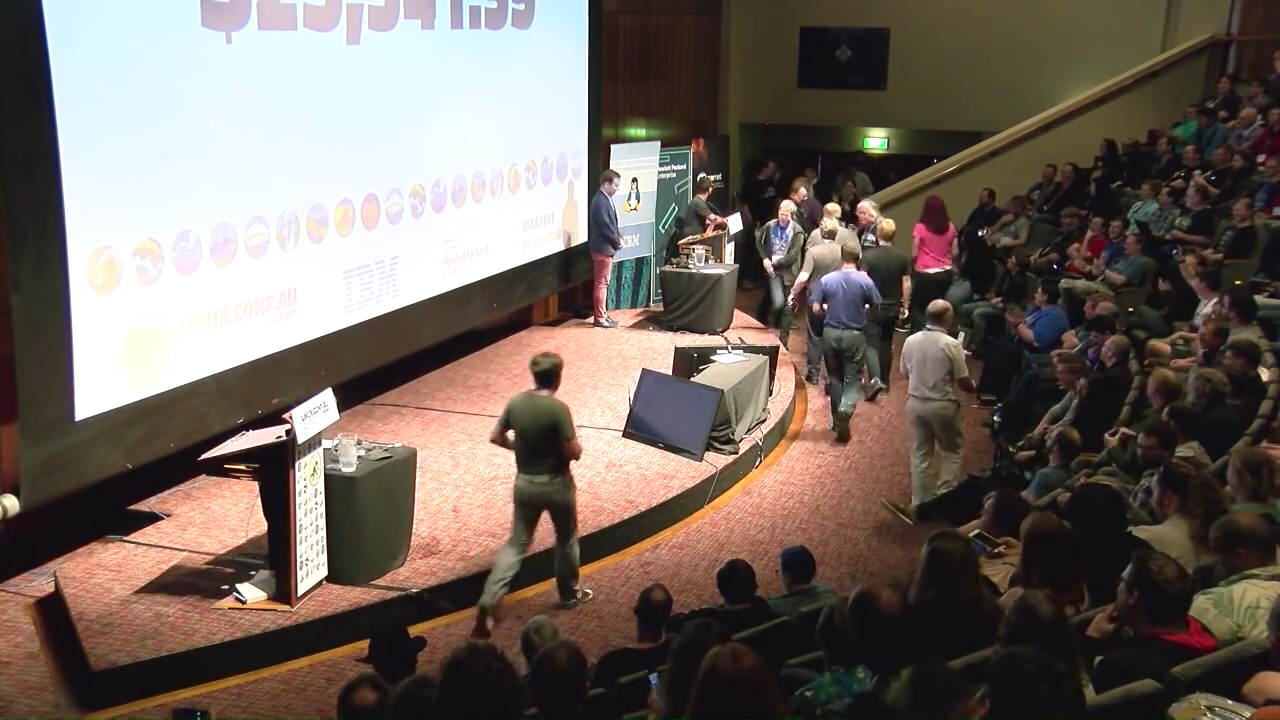 The conference wound down with fantastic lightning talks (check out Rusty Russell’s) and then I was surprised to be called to the stage by Chris. Chris, ever the showman, walked us through an ever-increasing amount of money raised for Outreachy. First, he told us that they sold many more raffle tickets than they had anticipated such that they had to get three batches of tickets and differentiate them. Then, Chris announced that two anonymous donors matched amounts and that they raised enough to fund two interns, and Kathy announced that Linux Australia was donating AU$7000! With three interns within reach, Martin Krafft ran down to the stage and called for people to donate the last amount on the spot. And then a lot of people ran down with their cash! In the end, the conference raised enough money for three interns, and the 2018 team announced that they’ll sponsor tickets for all three interns and their mentors to attend LCA 2018 (plus I got to pick the raffle winners). It was an amazing way to end an amazing conference!

Many thanks to the LCA organizing team and the Linux Australia community for keeping such a magical community alive.